Development, manufacturing, and sale of innovative products for ear and hearing protection is the core business of Innosan GmbH founded in 2008.

The company has its headquarters in the town of Schwetzingen famous for its asparagus and located conveniently between Heidelberg and Mannheim. The company is serious about quality and exclusively certified materials manufactured in Germany are used for the products. 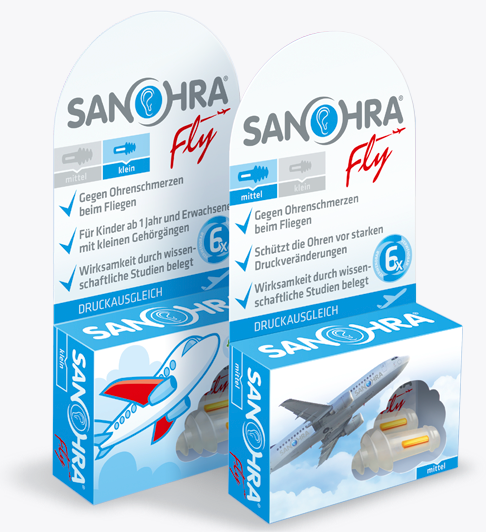 Almost every air passenger has suffered an unpleasant feeling of pressure or even pain in the ears occasionally during landings - the airplane ears. Sometimes hearing is affected even days after the flight.

Even the ear has to react in this situation. The Eustachian tubes, a tube like connection between the nasopharyngeal region and the middle ear, must ensure that the air pressure in the middle ear increases again through a so-called active opening. If this does not happen quickly enough, it leads to a painful bending of the ear drum called ear barotrauma, airplane ears or ear popping.

·         protects the ears against changes in pressure

SANOHRA fly is an ear plug with an integrated filter element or technically speaking a pressure reducer. A small chamber is formed before the ear drum by inserting the plug in the auditory canal. The filter element allows the pressure there to build up considerably slower and continuously as compared to the cabin. This gives the Eustachian tubes more time to take care of the ventilation to the middle ear. 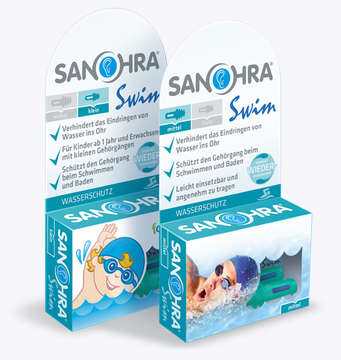 Even a little water in the auditory canal can be troublesome after a pleasant time in the water!

It becomes even worse when a small drop of water on the ear drum leads to restricted hearing or even triggers troubling sounds.

All those who do not want to give up on swimming or even just relaxing in the water even in autumn or winter are drawn to the numerous swimming pools or leisure pools and spas.

Please insert the SANOHRA swim ear plugs as recommended before bathing, swimming or showering. Children should use ear protection only as instructed and insert it in the ears only under adult supervision.

Adults with narrow ear canals should use the size meant for children. This should prevent any discomfort or pain associated with wearing a larger sized device. 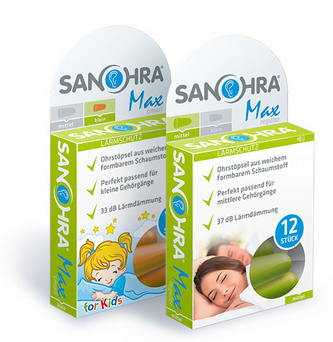 Stress generating noise or music that is too loud does not stand a chance of damaging the ear anymore. Various SANOHRA Max protection products protect the ear from an environment that is too loud and ensure concentration during work and a relaxing sleep.

Adults with narrow ear canals should use the size meant for children. This should prevent any discomfort or pain associated with wearing a larger sized device.

InternetAptieka.lv is leading online pharmacy, that offers a wide assortment, fast and free delivery throughout Latvia at fair price.